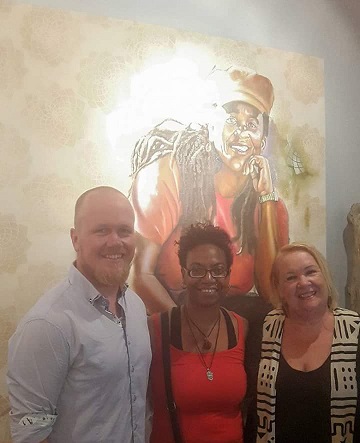 I am of Grenadian heritage Mother Everil nee Fletcher is from Union, St Marks and Father Linton Louison is from Gouyave, St John’s respectively.
My art story began in the mid 1990s whilst working as a Sports therapist/ Gym Instructor with a science background.
Encountered by chance or call it fate, an artists community and subsequently became involved in artists projects. Hence, employment direction changed and haven’t looked back since. I found a niche through art as a form of expression and my intent is to continue spreading the passion and knowledge gained far and wide.

Selected artists I have worked with:-

Career highlight – 2015 involved in a published Anthology of Sufi Poems ‘ Shadow of the One’ published by Intent Publishing
Project was conceived wholly online through a Sufi Facebook page ‘Zawia Ebrahim,’ on the strength of my online posts I was asked to contribute collage photography and poems.
Internationally based authors from Pakistan, South Africa, Brazil, United States and myself from here in the U.K.

Subsequently visited Pakistan in January 2016 to meet co authors/ poets in Karachi and Islamabad. Organised a reading of Anthology at T2F in Karachi , which was warmly received.

2004-2009 – After graduating from Goldsmiths, worked at East end local galleries and arts organisations including inIVA (Institute of International Visual Arts).

Postcolonial theory is my main subject of interest that includes Edward Said ‘Orientalism’; cultural theorist Stuart Hall; the influence of the British Black Arts Movement in the 1980’s regarding the gap within the art canon, highlighting the lack of representation of people’s from the Black and South Asian Diaspora communities; Intersectionalism as a way forward in acknowledging all minority communities within society as holding multiple identities, with similarities of struggle.
Audre Lorde writer/poet was an advocate of this in her writings in the 1970’s ‘I Am Your Sister’ regarding race, gender, sexuality, and class. Embracing difference to build strength amongst marginalised communities.
Angela Davis activist/writer is an inspiration and I have had the honour of meeting her twice in person attending talks and conferences. Including the launch of the ‘Stuart Hall’ building at Goldsmiths College hosted by the Centre for Feminist Research.

Yogi – A regular practitioner of Hatha Yoga and meditation.

Sufism – Student of mystical strand of Islam that aids my personal spiritual growth and development.

WE ARE IN THE NEWS!

You can find the full list on our page: Press