In a world of recurring conflicts, more than ever, the version of the facts stands as one of the most dangerous weapons of action among actors involved in the construction of history. The concept of “Post-Truth” became the main figure of rhetoric, influencing all layers of narrative support, both on the side of winners and losers.
Even with so much access to communication, man finds himself faced with a diffuse truth, diluted in false news, which runs the world at digital speed, run by large corporations, states and ideological groups, and we are never sure that our questions are properly translated, because, in the impossibility of an unsophismaly truth, we satisfy ourselves with the urgency of easy answers! And what we see, many times, nothing more are, than the shadows of the Platonian cave.
From this reflection point, the work presents an installation – “Truth” (from Google Series), a sculpture built with a seesaw and lunettes at its ends sides, alluding the volatility of versions and visions of the truth. This set is inserted in a panorama constructed with a horizon line formed by word “Truth”, translated by 104 languages of Google Translator, the most onipresent tool of tools, as an analogy of power holding, because these are the languages “elected” by the multinational giant, relativizing our understanding of what the truth is.
And since the verb, is our most tangible relation with the truth, the work also presents the word “Truth” and all its translations, on printed posters, which will be donated to the public.
In this sense, the translation of this so determinant word, will be placed as a symbol of the difficulty in reaching the common denominators to diminish or solve our contemporary dilemmas, in a planet in eternal crisis, but also as a bridge to increase this possibility. 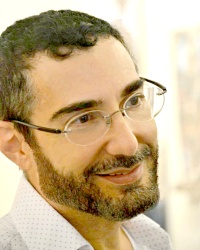 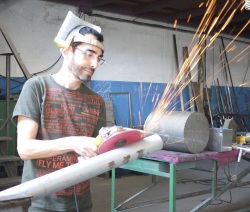 WE ARE IN THE NEWS!

You can find the full list on our page: Press